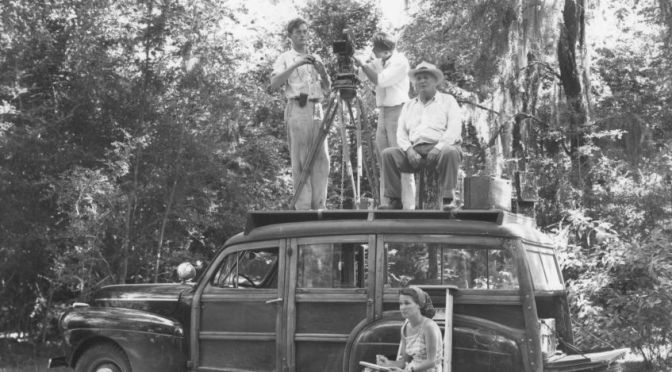 A director goes documentary by choice and not coincidence. In
so doing he seeks to serve his conscience and avoid the cupidity of
story-film as it flourishes under most studio conditions.
Documentary defines not subject or style, but approach.
It denies neither trained actors nor the advantages of staging.
Ir justifies the use of every known technical artifice to gain its effect
on the specator.
Two courses are open to the director of documentary. He may
seek themes and material at the ends of the earth in the manner
of a Flaherty; or he may face the problems of the community around
him in the manner of a Grierson. The choice is personal. These two
names plot the extremities of the dramatised documentary as distinct
from the descriptive style favoured by the lesser lights of the racket.
To the documentary director the appearance of things and
people is only superficial. It is the meaning behind the thing and
the significance underlying the person that occupy his attention.
To the documentary approach every manufacture, every organisation,
every industry, every craft represents at one point or another
the fulfilment of a human interest.
Documentary approach to cinema differs from that of storyfilm
not in its disregard for craftsmanship, but in the purpose to
which that craftsmanship is put. Documentary is a trade just as
carpentry or pot-making. As a trade its technique must be mastered
if the product is to be valuable and have meaning. But technique
alone is not sufficient.
A film must serve a purpose beyond itself if it is to survive. It
may serve entertainment (as the studio producers dictate), it may
serve propaganda (as the publicists demand), or it may serve art
as the highbrows pretend), but it cannot be an end in itself.
Because documentary is in its infancy and because production is
largely (but not wholly) made possible by serving propagandist ends,
the publicist himself is the main enemy of the director. Because
cinema is everyone’s plaything to criticise for good or bad, your
publicist will demand the inclusion of this or the exclusion of that
to the prostitution of your conscience.

Therefore, three demands must be made by the documentarv
director: the right to theorise, the right to experiment (time and
footage), and the right to attempt to satisfy his conscience. He mav
have to travel to sacrificial lengths to obtain these rights. Becauxhe
must look to the future he will try to satisfy the publicist’s demands,
perhaps produce a bad film thereby, and get kicked in the
pants just the same. It is at present a matter of compromise, of bluff
as bluff can. If he is ambitious he will hope to get away with a
number of second-rate films, goaded on by the belief that one day
he will turn out a top-notcher.
The documentary director must remember that his theme (or
message) alone compels audience interest. There is nothing personal
in a documentary with which an audience can identify itself. Perhaps
there are mass or social instincts, but not individual emotions.
But in story-film the audience can assume a personal interest in
characters or incidents, often projecting itself into the position of a
participant. Because there is a story to divert attention from
realities, the task of making story-film is more simple than that of
documentary. In fact, the audience will accept deliberate misstatements
of truth in story-film, but to lie in documentary demands
infinite skill, perfect craftsmanship and an accurate knowledge of
audience psychology.

Unlike the story-film director, the maker of documentary has
yet to gain the full co-operation of the trade. The renter and the
exhibitor do not understand documentary, and I am not sure that
they have tried. They search for established publicity angles and,
finding none, invent them. Yet their habits are retrogressive.
Moana was issued as “the Love of a South Sea Siren.” Documentary
must always go forward. It needs new distributions and new
publicities. These will come.
Meanwhile, production becomes specialised, demanding mentalities
capable of approaching a multitude of treatments, from
the school-film to the dramatic industrial.
But, if it is not to go the way of story-film, documentary musl
be protected against exploitation for commercial profit alone. Its
directors must retain freedom for their ideals.

ANOTHER REPERTORY CINEMA
The famous Everyman Theatre, Hampstead, has been re-opened
with a programme of repertory. J. S. Fairfax-Jones, one of our
London correspondents and a prominent member of the film
societies’ movement, is a director of this new venture. Among the
first films to be shown are Le Million, Tabu, and Cimarron.

VIDEO ESSAY - Tarkovsky: Life as a Reflection from Nelson Carvajal on Vimeo.

The Mouths of Švankmajer- Video Essay from Phil Whitehead on Vimeo.

The Rhythm of Editing from 16:9 on Vimeo.

Way Too Indie VIDEO ESSAY: The Screen Poetry of Terrence Malick from Nelson Carvajal on Vimeo.

Film Essay- The Role of Landscape, Nature and Environment in War Films from Adam DJ Laity on Vimeo.

Godard in Fragments from Criterion Collection on Vimeo.